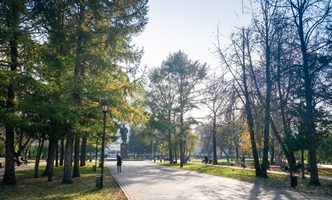 As a large centre of multi-branch industry, science and culture, Perm has been promoting the European-born idea of “letting the nature into the city”.

Perm City enjoys a rich nature capital. The world classifications tend to rank the city with at least 50% of its territory covered by woods as an ecopolis. The “Green lungs” of Perm amount of 56.7% of its total area (which is at present about 800 square kilometers).

The green forested area within the city’s boundaries, covering around 37 900 hectares, adds to the unique appearance of Perm. The forests do not only form a green ring around the city but also beautify its residential areas.

Perm has enormous water resources as it is located on both banks of the Kama River, the largest river in the Western Urals.    The Kama links Perm through the canals to 5 European seas:  the Caspian, the White, the Black, the Azov and the Baltic seas.  The waterway within the boundaries of Perm stretches for 1805 kilometers, reaching the width of 1200 meters. The Kama and its tributaries are   strong flows fed by rains, underground and melting waters. In winter both the Kama and its tributaries freeze and cover with ices.  The Kama basin has 73 718 rivers, most of which are small, running for less than 10 kilometers.

Over 300 small rivers and creeks add beauty and diversity to Perm’s landscapes.

There are over 100 of springs, which are important for the life of other water objects, and to up keeping of water resources balance and stability of natural life.

The green areas in Perm are systematically renewed. Since 2014, the city has planted over 80,000 new trees and bushes; over 1 million of flowers are planted every year.

The city has very 20 recreational areas with outdoor exercise equipment,  playgrounds for children  and barbeque points.  There are 15 “ecology” walking paths of about 40 kilometers and in winter 180 skiing tracks are built.

Perm has 19 nature areas of regional and local importance that are under a special protection.

The forest area named Chernyaevsky Forest is located in the area within two city districts - Dzerzhinsky and Industrial – outlined by the Shosse Kosmonavtov, the Podlesnaya and the Vstrechnaya streets.

The area is important both as a natural reserve and recreation zone, as it the only natural forest within the city’s boundary; the  forest is  deciduous, with spruce, fir and pines typical for the Perm Region.

The park has historical, natural and recreational importance and is very frequented by the residents of Perm.  The park boasts a range of rare species of plants under protection.

The pine forest, known as “Zakamsky Bor” is located on the right bank of the Kama to the north of the Bortzov Revolutsii Street and to the east of the Polytechinical University Campus.

The area is an important natural and recreational zone, it has a rare combination of plant life which is similar to relict pine forests of the Kungur forest-steppe range. It also has rare species of plants featuring in the Red  Book of Endangered  Species of the Perm Region  and Middle Urals.  This area is populated by the black vulture, which is an endangered bird on the territory of Russia.

"Sosnovy Bor”  is located in the Kirov district of Perm on the left bank of the Kama, between the Marshala Rybalko and the Kirovogradskaya streets.

It has over 30 kinds  of medicinal plants. Pines  purify the air and eliminate pathogenic flora thus making the forest a perfect rehabilitation place.  It is home for a rare species of  birds, the black vulture, and many endangered plants under protection.

This area is located behind the premises of the “Biomed” Science and Production Center.

Located on the right bank of the river between the Krasnoborskaya, Dedukina, Dokuchaeva and  further stretching over the Yakutskaya streets,  this is the popular recreational area for the local community residents.

It has been organised as a protection area for the elite species of pine trees (seeds stock).  The trees age in the area comes up to 140-150 years for the pines, 130 years for the birch trees and 150 years – for spruce.  The forest is also the nesting area for the  black vulture.

Located to the south of the Golovanovo residential district near “25th kilometer” and “Adiszehvo” train stops.

Located in the Kirov district behind the former “Rubin” cinema theatre, “The Ducks Mash” is a nesting place for wild ducks.  The mash is a component of a complex eco-system which has a strong influence on duck population structure and stability.

This man-made  natural park  not only is important in terms of the city ecology, but is valued  for the beauty of landscape.  The pond area has always been a popular recreation place for the residents.

10. “The Novokrymskiy  Prud” (The Pond at Novy Krym settlement)

Initiated by the city residents and started as a man-made site, the area has become an inseparable part of nature environment of Perm. The territory feature more than 55 species of plants, which provides good conditions for various animal life, there also the ducks nestlings.

The Yegoshikha necropolis  is an area of historical and cultural importance  which is located in the vicinity of a unique geological object of the Permian period - “The Yegoshikha rock exposure” and archeology site dating back to Paleolithic age – “The Yegoshikha”.

The Andronov Forest is located in the Industrial district of Perm and is a natural protection area for proliferation of industrial waste from the Osentsy production area, thereby playing a substantial role in maintaining the ecological balance of the city.

The landscape is formed by a low-hilled valley with the floodplain of the Mulyanka river; the area boasts high diversity of floral life.  The spruce and pine abundant in the area are a natural forest.

This area under protection is located at the start of the Mos’ and Brodovaya rivers  within the river basins of the Kama and the Sylva,  and is abundant in dark pines.  Apart from the 140-year-old spruce, the other species include fir, birch, aspen, grey alder, linden, ivy and pine.  Some of linden and spruce trees are over 200 years old.

This area under protection   is mainly characterized by spruce and linden, with a smaller proportion birch and pine, averaging to over  100 years.  A typical feature of the forest is that nearly all the plant life are natural-growing. The forest is an important factor of the city’s ecology as it has high-quality plants and high productivity.

The area is located in the Sverdlovsky district of Perm outlined by the Brodovsky Way and the Eastern Bypass. There are high-quality pines, spruce and larch of various types, as well as their plantations used as the seeds stock.

Located in two districts (the Sverdlovsky and Motovilikha), the nearest residential area of Novye Lyady  within 4 kilometers from its boundaries, the territory boasts 90-110 year-old  birch, spruce, larch and linden trees.  Along the Gluszhikha river there are relict dark-pine taiga areas with 130-year-old spruce.

Located in both Motovilika and Ordzhonokidzevsky districts, the area is a mixed forest of 120-year-old trees of spruce, larch and birch, with a small area of the relict dark-pine taiga in the eastern part.

The animal life in Perm is abundant  and diverse. The Perm forests are inhabited by elk, beaver, hare, squirrel, fox, marten, weasel, ermine, mint and muskrat. Of 250 birds species resident in Perm  50 are considered as  endangered.

Ranking high in economic production and growth among the other regions in the Urals and the Volga Federal district, Perm City is undoubtedly a leader in ecology ratings.