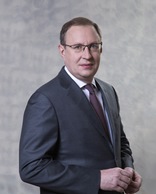 Dmitry Ivanovich Samoylov  was born on September 7, 1962  in Perm. In 1979 he joined the Perm Polytechnic Institute which he graduated in 1984  with a qualification of a building engineer.

Dmitry Samoylov was elected a councillor to the first Legislative Assembly of the Perm Region.

1997 to 1999 – the first Deputy Head of the Regional Committee for State Property;

Starting June  25, 2012,  Dmitry Samoylov joined the regional government  in the position of Vice Chairman of Perm Region Government – Minister of territorial development, and then starting January 15, 2013 - the Head of the Administration of the Perm Region Governor.

On November 25, 2016 Dmitry Samoylov was officially inaugurated as the Mayor of Perm City.