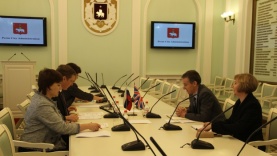 Richard Dewell was appointed British Consul General in Yekaterinburg  in February 2019, and this was his first visit to Perm. The consular district he is responsible for includes the regions within the Ural Federal Area, the Perm Region, Bashkortostan, Udmurtya and the Orenburg Oblast.

“We have especially warm appreciation of the links with the UK as we are happy to have a strong and successful twinning relationship  with Oxford. We take a special interest to many practices they  shared with us - for example, the community centres in Perm  have been organized on the same lines as the ones in Oxford. Both Perm City and the Perm Region are involved into  trade exchange with the UK  and we will support the efforts of the business to expand it,” noted the first Deputy Mayor Victor Ageyev.

2020 will mark 25 years of establishing the twinned partnership between Perm and Oxford, and there is an intention on both sides to start preparing for this celebration in due time so that there is an opportunity to organize official events as well as to implement important joint projects.

“The first thing I did on my arrival to Perm  was to go and listen to “Lucia di Lammermoor” at Perm Opera House. This was so fascinating that I can say I have become the fan of your city. Despite the differences existing between the two countries, there is still a lot of enthusiasm  in developing links between the people. Personally I am intended to fully support the development of cooperation in business, culture and the links between people”, said Richard Dewell.

The UK Consulate General was opened in Yekaterinburg in 1995. The previous visit from the Consulate General to Perm was in June 2018 when the delegation headed by Derek Lavery took part in the celebrations devoted to  295th anniversary of Perm, on the invitation from the Perm Mayor Dmitriy Samoilov. 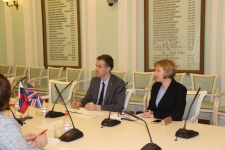 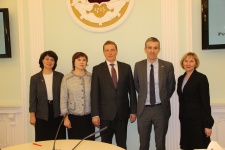