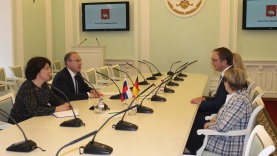 This is the 12th visit  to Perm for Markus Bauer, who has been lecturing as a guest professor at Perm National Research  Polytechnic University for students studying Public Administration.

- Perm and Salzland have a lot in common, regarding the priorities – development of education, transportation, raising quality of communal services, maintaining the population growth. The region’s production is based on mining salt, potassium and soda. However, the number of residents is much smaller  and amounts to 200,000. I believe there are a lot of things we can do jointly together’,  said Markus Bauer.

Mayor  Samoylov assured his German counterpart  that he would support and develop  mutual cooperation, primarily in economic sphere.

- Perm has a twinned city in Germany, Duisburg, which is a very successful partnership in local governments cooperation, which was marked with a special award from the Russian and German Foreign Ministries in September 2018 in Berlin. We are happy to expand  our partnership with the German colleagues,” the Mayor noted.

Dmitry Samoylov invited Markus Bauer to visit school No 12 in Perm, which is a part of Perm Education Department priority project aimed at creating the international level system of education Mister Bauer responded expressing his willingness to learn more about the school and the projects during  his future visits to Perm.