Perm children’s drawings to be displayed in Qingdao (China) 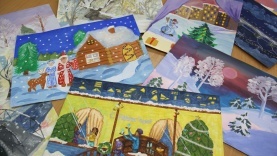 A drawings exhibition will be held in Qingdao, a twinned city of Perm, in May 2019. The drawings are made by children from Perm Youth Center.

In January 2019 the children from Perm Youth Center sent gifts to Qingdao (China); the accompanying letter explained  traditions of celebrating the  New Year in Russia. The children sent their gifts and 22 drawings of Russian winter and the New Year celebrations to their counterparts in Qingdao to mark the Chinese New Year on February 5.

The Chinese partners appreciated the drawings and the idea, and suggested organizing  a larger joint exhibition  of children’s drawings thus asking  for 30 more pictures from young Permian painters.

The head of Qingdao Foreign Ministry Office Mou Jundian  in his reply expressed his thanks to the young people from Perm Youth Center and noted that this event stems from the  negotiations held in November 2018 during the International Education Forum of Qingdao’s twinned cities with participation of  Perm Youth Center Director Natalya Roslyakova.

“Taking into account the 70 years of diplomatic relations between the People’s Republic of China and Russia to be marked in 2019, we are planning a number of joint events with Perm. We would like to suggest an exhibition to display the young painter’s works from Perm and Qingdao”, says the letter addressed to the Perm Mayor Dmitry Samoylov.

The exhibition will be held  on May 24 to June 2, 2019 in Qingdao Modern Art Museum and will feature paintings and other works, including photos, paper-cut and hand-made  items, as well as a presentation on Perm.

“The long-term international links between the cities have found continuation  at a new level, namely, in creative communication between the young people”,  stressed Tatyana Grigorieva, head of International and Inter-municipal Relations at Perm City Administration.

Qingdao (People’s Republic of China)  has been  a twinned city of Perm since 2006. It is located in the south-west of  Shandong Bandao on the coast  of the Yellow Sea and is an important economic center of Shandong Province.