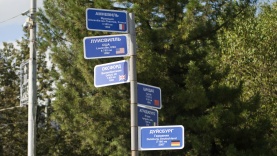 Twinning movement started during the World War II. In 1943 году the English town of Coventry, which was heavily bombed by the German air forces, and the Soviet Stalingrad which never surrendered to the enemy, decided to establish friendly relations to promote peace and future well-being of the people. The noble aims pursued by the first twinned cities were widely supported worldwide.

“Twinning is an open and clear institution of people’s diplomacy that helps countries to keep up relations through communicating with people and destroying stereotypes. There are investments that are not brining immediate results, but paying back in full in the future. Our twinning links are a true example of such investments. The city administration has been developing these links for over 20 years now and receive a substantive and tangible payback in the form of mutually beneficial relationship in a variety of spheres.”- states Dmitry Samoilov, the Mayor of Perm.

The efforts of Perm City Administrations in public diplomacy were highly appreciated at national and international levels.  In 2018 in Bishkek Perm was the winner of the competition run by the Union of Russian Cities “The best municipal practices” in the nomination for “Peoples’ diplomacy as an efficient inter-municipal interaction”.  In Berlin Sergey Lavrov, Russian Foreign Minister, handed in to Dmitry Samoilov, the Perm Mayor, Certificate of Honour from Russian and German Foreign Ministries “To cities of Perm and Duisburg for a substantial contribution into development of local-level cooperation between Russia and Germany”

A specific feature of twinning movement through the recent years has become the rising involvement of the young people.  The projects initiated by them are focused on the issues of intercultural communication, IT technologies and sports.

For instance, the students from Perm school No59 and Oxford Saint-Andrew’s primary school are involved into education project – they exchange video tours, video lessons and letters.

In Louisville  lecturers and students at  Fern Creek High School are doing a cultural project on the role of sports in people’s life in different countries, and they invited senior school students from 7 countries to take part n the project. Perm is represented by school No59.

Supported by education department of Perm City administration, Perm Gymnasium No 2 and secondary school No2 of Qingdao are involved into joint programmes, on-line conferences and classes. Perm Gymnasium won a Prize of Honor “Confucius Class of the Year” which was handed to Gymnasium’s Director Lyudmila Sukhanova by Chinese Education Minister Yang Guijen.

Most “passionate” twinned city Agrigento is Perm’s regular and active partner in culture. In March 2019, actors from Perm visited this sunny city for International Folklore Festival of “Flowering Almond-tree” where “Vereteno” (“The Spin”) creative project from Perm Youth Culture Center represented both Perm Region and Russia.

Due to the twinning links, hundreds of Perm residents were able to take part in carious international programmes, conferences and forums both in Perm and abroad.  Development of twinned relations is only possible through involvement of the residents who understand the significance and vale of the public diplomacy are motivated and initiate the project aimed and strengthening the links between cities and countries.

Among such people are: Chair of Sister Cities Perm-Louisville Committee Valery Voloshin, Director of Football School , International Football Camp organizer  Oleg Gavrilov,  organizer of Oxford –Perm exchange programmes Galina Gusarova,  Creative Director  of “Voskreseniye” Group and  manager of  cultural exchange programmes with Agrigento Irina Kuleva,  Foreign languages Department lecturer at Perm  National Research Polytechnic University  and  part of Perm-Duisburg projects Elena Moschanskaya, Director of Gymnasium No2, initiator of educational projects with Qingdao Lyudmila Sukhanova , member of “Perm-Duisburg” Society , organizer of “Perm-Duisburg Lectorium”  Elena Shafieva”. It is due to the efforts of these and many other people that Perm keeps up its position of a leader in development of public diplomacy.