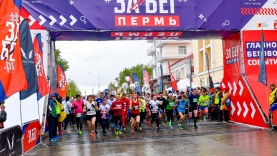 Russian Federation Marathon is the largest and most expected running event of the year, which has already been held for three years in a row. For the first time, the marathon was held on May 21, 2017.

It took place simultaneously in 10 Russian cities: Moscow, St. Petersburg, Nizhny Novgorod, Samara, Kazan, Rostov-on-Don, Yekaterinburg, Novosibirsk, Krasnoyarsk, Vladivostok with 40 thousand participants. On  May 19, 2019, 250 000 runners from 18 Russian cities (from Moscow to Yuzhno-Sakhalinsk) began this marathon at the same time to compete for the title of Russian Running Capital. Athletes, corporate teams and amateurs who have no health contraindications were invited to participate in the race.

Perm was a part of the running event for the first time. About 2500 people took part in the marathon, the moto of which was “One country - OneRun”. According to the list of athletes the oldest runner was 77 years old, the youngest was 6 years old. Among participants, there were the governor of Perm region Maxim Reshetnikov and the Mayor of Perm Dmitry Samoilov.

There were four distances of varying difficulty suggested for marathon participants, which include beginners-non-professional-professionals -half marathon: 5 kilometers (3.1 miles) , 10 kilometers (6.2 miles) and  21.1 kilometers (13,11 miles), and there was a track for kids about 2 kilometers (1, 2 miles).

Runners gathered on the Cathedral Square, where they were met with pleasant and invigorating energy music. On May19, the weather in Perm was terribly changeable - snow, rain with cold wind and the sun constantly replaced each other, trying to keep marathon participants on their toes. And at 11 o’clock a huge number of people started the Russian Federation marathon.

Every runner was given chronometer chip number and commemorative T-shirt with symbols «Забег. Рф». At the finish, athletes got a medal, one apple and a bottle of water as a sign of a healthy lifestyle.

According to the results of the marathon, Andrey Smirnov from Perm and Alsou Asanov from Berezniki became absolute winners at a distance of 21 kilometers. It took them 1 hour and 9 minutes 25 seconds and 1 hour and 18 minutes 5 seconds respectively to run the half marathon.