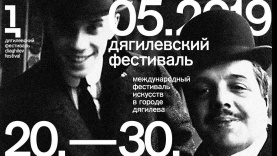 The magnificent opening of the International Diaghilev Festival came off on the 20th of May at the Soldatov Palace of Culture. The Festival orchestra consisting of the MusicAeterna and guest musicians performed monumental Mahler’s 9th Symphony and an extraordinary piece «splinters of ebullient rebellion» written by a modern composer Malin Bang from Sweden.

This year the festival will last for 11 days and will take place at eight venues: Perm Opera and Ballet Theatre, The House of Diaghilev, Perm Organ Concert Hall, Perm State Art Gallery, the Soldatov Palace of Culture, Perm Academic Theatre-Theatre, Triumph Private Philharmonics and the Shpagin Plant. At the latter, the concerts of the festival will be broadcasted so that more citizens and guests have a chance to watch them.

Each festival day is rich in varied events. During the daytime, the participants can attend the Festival Club for meet-the-artist sessions, public talks and master classes. For example, those who have been longing to be an orchestra musician or a choir singer can live out their dreams through musical school lessons for adults. Under the guidance of experts, they will learn some musical pieces. In the evening, the programme of the festival offers piano galas held in total darkness at The House of Diaghilev or midnight concerts and watching the sunrise at Perm State Art Gallery.

The major part of the Diaghilev Festival 2019 is a concert programme consisting of both old pieces and contemporary experimental opuses, which have been chosen by Teodor Currentzis, an artistic director of the festival.

Two compositions of baroque authors – the oratorio by Heinrich Schütz and madrigals by Johann Hermann Schein – will be performed by the French ensemble La Tempête. The ensemble is concentrated on using different forms of art, such as theatre, dance, light and electroacoustic music in order to provide great influence on the audience. The concerts of the Austrian orchestra Klangforum Wien is also expected to be unusual. The musicians are going to perform a piece “In iij. Noct.” by Georg Friedrich Haas in total darkness and without music sheets. The duration of this concert will be decided during the performance.

The closing of the Diaghilev Festival will be held on 30th of May at Perm Opera and Ballet Theatre featuring Teodor Currentzis’s interpretation of Johannes Brahms’s German Requiem performed by Mahler Chamber Orchestra and Perm MusicAeterna Choir.