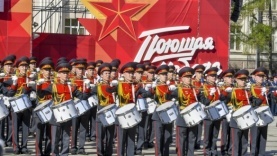 On the eve of the Victory Day Mayor of Perm Dmitry Samoylov hold a reception for the War veterans at the city administration.

The Mayor emphasized how the war changed Perm and played a crucial role in its history, as it eventually affected every family.  Over 100,000 city residents joined the army and went to the front, a third of them never came back home.  During the war many industrial productions were moved to Perm, and the workers produced ammunition, plane engines and other supplies for the front.  It is not surprising that many streets in Perm were named in honor of both military leaders and ordinary soldiers, famous designers and engineers.  The city also provided housing for the evacuated residents of Leningrad.

“It is the honor to meet you today and say the words of gratitude for your heroism and love for the Motherland, to thank you for the  efforts and labour you contributed  into the development of our city after the war “, noted  Dmitry Samoylov.

On the Victory Day, May 9, 2019 the veterans became the honorable guests of the festivities and the parade.

The celebrations in Perm in the morning of May 9 in the city center.  The keynote for this year’s celebrations became the songs of the wartime. 23 parade crews and 27 military vehicles took part in the parade.

The procession was preceded by a thematic show “The Singing Victory” which presented special musical composition “The Victory Day” produced by Perm composers and sang by a joint choir “The Choir of Generations” which brought together students of musical schools, colleges and institutes and veteran’s choirs from the city districts.

The parade was followed by a social action of “Immortal Regiment” with more than 40 thousand people marching through the city and the central square.

On May 9, 2019, all city parks organized special shows by Perm musical groups and other activities. Adults and children could experience writing a letter to a Red Army soldier at the front using an ink-pen and folding the letter into a triangle, as it was the practice during the war; they could see and learn about the household objects, clothes and the weapons of the time.  The Mindovsky Park for example produced a display of retro cars and military cars of the 1930-1940s. The visitors had a chance of taking a photo in front of the military cars dressed in a special outfit – a waterproof raincoat and helmet – and holding the gun.