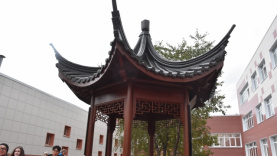 On September 27, 2019 the ceremony was held at School No 2 in Perm inaugurating the traditional Chinese “Peony Pavilion” which is a gift to the Perm Region from Jiangxi Province in China. The ceremony was held in conjunction with the International Day of Chinese language and culture.

The guests and participants of the event enjoyed the master-classes on calligraphy, red-paper cutting, tea ceremony and Go game.  HSK exam certificates were handed over to over 150 school students from Perm, other towns of the Perm Region and neighbouring areas, among them are over 50  fourth-grade  children from School No 2.

Agreement between the Perm Regional Government  and the People’s Government of Jiangxi Province on cooperation in trade, economic, scientific, technical and cultural areas was signed on May24, 2014.