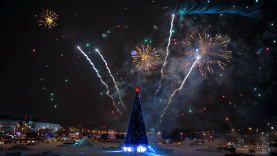 Perm Youth Culture Center started the international project “Friendship starts with the New Year tree”. Schoolchildren from Perm and their counterparts from the twinned cities of Perm will send each other the New Year greetings and exchange hand-made decorations and gift cards.

The twinned cities participants include  Amnéville-le-Thermes (France), Duisburg (Germany), Oxford (the UK), Louisville (the USA), Agrigento (Italy), Qingdao (China).  The top event in the project will feature the exhibition presenting the New Year trees from the twinned cities in the main building of the Center which will open in the beginning of December.

At the start of the project,  the children of the Center, with the assistance of the International and Department of Perm City Administration, sent letters to the twinned cities asking them to join the project and  send to Perm hand-made New Year decoration in traditional style to decorate the festive tree.

In November 2019 the Center will organize workshops and master-classes in Perm schools  where the schoolchildren will produce over a hundred postcards with the symbols of Perm.  These will then be sent to their counterparts in 6 twinned cities as season’s greetings for Christmas and the New Year, telling the stories about Perm and helping them to find new friends abroad.

The project’s focal point will start with the exhibition of the New Year tree of the twinned cities in the main building of the Youth Culture Center  (Sibirskaya Street, 29) to be opened n December 29, 2019 which will last for 2 months.  The exhibition will be accompanied by an interactive “learn-and-play” programme for schoolchildren.  The visitors will be able not only to see the festive folk-style decorations, but learn a lot about the history, culture and sights of the twinned cities, as well as enjoy playing   traditional New Year games from different countries and thus become part of the  international links of Perm City.

The project “Friendship starts from the New Year tree”    became the winner of  XXI city competition of social project “City is us” in spring 2019. The project’s aim is to open up culture of the twinned cities to schoolchildren in Perm.

A couple of years ago the children from the Center had sent their toys and decorations to Louisville and Duisburg, where decorating the New Year trees with items coming from the sister-cities has become a tradition.  The friendship link connect the young artists from the Center and children from Qingdao in China – the Perm  kids drawings were displayed in the two art exhibitions in China.