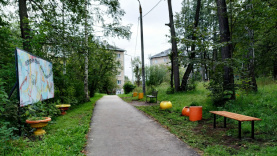 The German city of Düren hosted the III Youth Forum held under the slogan “City in Movement: Your Project Is Important”. The Forum was attended by the delegation from Perm which presented a number of projects to be implemented in the twinned cities.

The joint team Duisburg-Perm developed a project named “ Change the courtyard – change yourself” aimed at involving the young people into local government.  The practical side of the project featured a number of community work days (“subbotniks”) involving small things done to improve the neighbourhood. By way of an example, the young people  in Zarechny neighbourhood area in Perm together with the students team held a “subbotnik”  preparing  the park alley for the winter season.

Other activities for the young people within the project will include cleaning the community space, organizing various improvement works – building the lawns and flowerbeds- in Perm and Duisburg, a mobile photo exhibition “Change the courtyard - change yourself” to be displayed  in administrative buildings and community centers.  In spring next year the project teams will again be involved into  the cleaning works in the communities as well as hold skype-sessions and discussions on ecology issues.