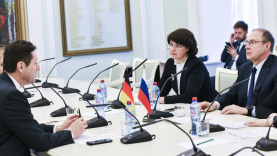 Perm Mayor Dmitrii Samoilov met Mathias Kruse, German Consul general in Yekaterinburg, to discuss  possibilities of applying German experience and technology in waste recycling  as well as issues related to  digitalization  of urban environment.  The Consul-General  highly valued the efforts of Perm in Duisburg in implementation of joint projects.

The guests were briefed on social and economic growth of Perm and its development priorities.

- Friendship links between Perm and its twinned cities have been expanding from year to year, and exchange visits and joint projects have already become a tradition.  This is the result of a systematic and well-organised work. We view our Duisburg link as very special”, noted Dmitrii Samoilov.

Mathias Kruse in his turn shared  the satisfying first-time impressions of Perm.

- It is my first visit to the city and I’m already planning a new visit in March being invited by the classical university; I’d like  to focus on science and education as  an important  area for cooperation. Your friendship link with Duisburg is an example of cooperation going far beyond the limits of ordinary partnership. It is clear that cooperation is meaningful for both sides and there are many successful projects under way, and  we would be happy to provide the necessary support”, stressed the Consul-General.

Mr Kruse  expressed  gratitude for the Perm City Administration support  to School No 12, which shows a remarkable success in teaching German and German culture.

- Further, it’s important that you provided a lot of support to the Workshops for the Disabled in Perm. This is a true example of real partnership between Perm and Duisburg able to positively affect  serious humanitarian issues”, said Mathias Kruse.

The participants discussed in details the prospects for cooperation, namely, in implementing “the waste  reforms” in Russian cities, using German experience and technologies in household waste recycling, as well as digitalization of urban environment. Mayor Samoilov  emphasised the experience gained in Germany in these areas is of great interest  for studying  and finding the ways to adapt it to local conditions.

In view of the coming  public-wide celebrations  for  the coming 75 WWII Victory , Mayor Samoilov invited the Consul-General to  visit Perm on May 9, 2020.