Perm was awarded the honorary title ‘City of Labour Valour’ 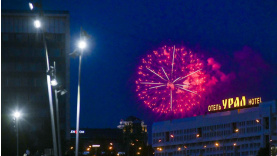 On July 2, 2020 President of the Russian Federation Vladimir Putin signed a Decree to award the honorary title ‘City of Labour Valour’ to the City of Perm.

The new honorary title established in 2020 is bestowed upon the citizenry of Russian cities whose residents made a substantial contribution to Victory in the Second World War, provided uninterruptable manufacturing of military and civil-purpose products by city plants and factories, manifesting mass labour feat and self-sacrifice.

In the war time the city of Perm bore the name of Molotov and numbered 255,000 residents. More than  100 thousand Perm men, women and children worked hard at various industries.  In addition to Perm factories 64 industrial enterprises were evacuated to the city from the areas occupied by enemy forces.

During the war Molotov/Perm produced more than 13 million mortar shells, about 3 million charges for Katyusha rocket launchers, over 10 million pairs of boots and helmets, 650 thousand telephone sets.  Every third artillery shell was equipped with a Perm fuse. All combat aircraft built during the war were provided with Perm fuel equipment. Two-thirds of all missile charges manufactured by the country's powder industry were produced in Perm. During the war years the factories of Molotov were awarded with 11 Orders - the highest state awards.

The award was marked with marvelous fireworks which proud Perm citizens could watch at night on July 3.