Open Screen is a friendly networking group that meets to watch and discuss short films in Oxford. 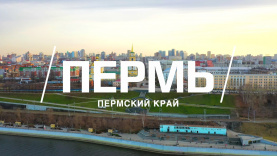 It has moved online using the remote conferencing software Zoom until the lockdown is over. Perm and Oxford participants presented their short films to celebrate the 25th Anniversary of our twinning.

Perm representatives participated in the event and showed a 4-minute video “Me and My Perm” while Oxford participants demonstrated their film “Dancing the Difference”.

Many attendees of the event said that it was wonderful to see the charming and funny film from Perm and hear all about the experience of making it as well as the life changing experience of all those involved in the ‘Dancing the Difference’ exchange of 2004-2005 too. Perm/Oxford dance film "Dancing the Difference” was introduced by Evie Sherry Starmer who was on the trip to Perm in 2004 abnd talked about different approaches to teaching in the two countries.

All participants found the films interesting and the discussion worthwhile. The Open Screen Project is one more opportunity to connect with other filmmakers and show and talk about latest bits of film kit.