The pictures by Perm schoolchildren to be displayed in Oxford 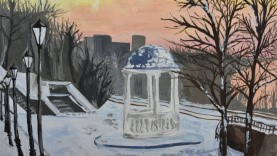 The art competition “Me and my favourite place in the city” held  in Perm produced a variety of works that will be displayed in Oxford,  the twinned city of Perm.

The competition was organized by the Youth Palace with the assistance  of  the Culture and Youth Police Department of Perm City Administration with the aim of  providing support to the talented youth in arts, as well as to further develop twinning between Perm and Oxford (UK). In the end of November the competition results were announced and winners received their awards.

The competition participants are schoolchildren of Perm schools  organised into age group  9-12,  13-14 and 15-17.

The participants used a variety of  techniques for their drawings – water colours, gouache, graphics, collage.  The pictures represent   well-known sights and objects of Perm as well as places special for the participants, like the quiet and narrow streets of Gaiva district, a view from the school window,  a stroll through the Pine Park, etc.

The competition jury  summed up the results in each age group in several nominations, the winners and participants received their awards  and certificates.

The winner  in the group aged  9-12 became Veronika Bagrova (Art School No 7) with her “The evening Kama”. She was followed by Veronika  Kalyakina (Perm Youth Creative Center, Palitra Studio) with the picture of Perm Bear. Arina Nurullina (Art School No7) (“The embankment”) and Vasilissa Kodolova (school No 9) (“The snow blanket”)  shared the third place.

In the age group  13-14  the first prize went to Darya Koviazina (Art school No 7) with the  picture “On the way home” . The second was Julia Nazarenko (“Petrolium +” school)  with “The Opera House”.  The winner in 15-17 age group became  Yekaterina Zyryanova with “The first snow”, followed by Elina Uryadnikova (“The sights of Perm City”) - 2nd and Anastasiya Kuplyanskaya (“П”)  - the 3rd, both representing the “Dream” Art Studio.

As a reminder, this year Perm and Oxford mark the 25 years of  twinning relationship. The official declaration on twinning between Perm and  Oxford  was signed in 1995.  Throughout the years of its existence the link between the two cities has been fruitful and developing  through a variety of successful joint projects, promoting communication,  exchange of experience and strengthening the mutual understanding between their residents.

Despite the difficulties related with the pandemic, there has been a large number of various on-line projects implemented this year both in Perm and Oxford, aimed at strengthening friendship between the residents of the twinned cities.  “Perm-Oxford Friendship Week”  covered  several on-line events, such as  dancing workshops and exchange of culinary recipes. Other events included interactive quizzes on Perm and Oxford and a series of lectures “Trends in Modern Journalism” with participation of experts from Oxford. A video featuring two dance groups from Perm was filmed as part of  “Oxford Christmas Lights Festival”.

On November 19, 2020 the activists of Perm-Oxford twinning link took part in the TV bridge organised at  the Pushkin Library, during which the participants exchanged the symbolic gifts of friendship – the art work in the form of hand-made quilts representing the well-known sights and symbols of each city – and summarized the results of the festive events.