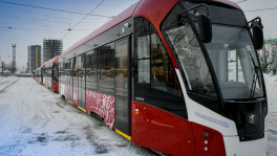 A new tram route No. 11 started running along the renovated Ulitsa Revolyutsii on January16. The Governor Dmitry Makhonin and the acting Mayor of Perm Aleksey Demkin noticed that the motion was smooth and essentially silent

The renovation of Ulitsa Revolyutsii, one of the busiest streets in the city, is one of several large-scale projects of Perm City Administration. The work was funded from Regional Roads Foundation (75%) and from municipal budget (25%). The reconstruction started at the end of 2018, and was completed by the end of 2020.

“The regional authorities are interested in improving the city’s transport system making it more comfortable for residents. This is our main goal. For this purpose, more than 20 new-generation trams were purchased. We are going to work further on this project", Dmitry Makhonin said.

The Governor emphasized that the purchase of new buses and trams is not enough for comfortable rides. A special attention is therefore paid to the construction of new lines and roads, as well as reconstruction of the existing ones.

“A new tramline was opened in Perm for the first time since the 1970s. This new line is fundamental for the tram system because it connects two large districts - Industrialny and Motovilikhinsky. With the help of funds we have an opportunity to buy new trams which are safe and comfortable for our passengers,” Aleksey Demkin said.

As routes change, a new time schedule appears. From now on trams going in the same direction will serve passengers at equal frequency to avoid situations when people have to wait for a tram for a long time.

The layout of new silent tram tracks on a monolithic base makes it possible to significantly reduce vibration and to increase the overall service life of tramlines. This principle of construction is used in Russia (St. Petersburg), Sweden (Gothenburg) and Hungary (Szeged).

In addition, the new section of tramlines along Ulitsa Revolyutsii will be used along with buses in the future. This innovative project solution will optimise traffic flows and redistribute the movement of public transport. As a result, passengers will be able to wait for the necessary transport on one landing platform.

In the new tramcars, all necessary equipment is installed and ready for use: a navigator, a display board, a passenger flow accounting system, an air heating and conditioning system. Due to the low-floor cars the trams are suitable for mobility impaired people. The total capacity of one tram is at least 110 passengers. Also, the cars have an autonomous running reserve. They provide for interactive control, an external video monitoring system for passenger embarkation and disembarkation zones and monitoring of the traffic situation.