The coldest temperatures of this winter have come to Perm. 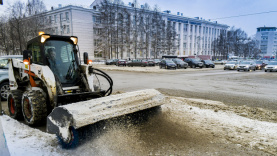 February is one of the coldest and snowiest months in Perm. Average depth of snow cover this year is about 50 cm. On February 9, the temperature in the city dipped to -30 C. However, it was a crisp sunny day when everything was covered with sparkling frost.

Winter is the time for municipal services to get snow removal equipment out and treat sloping streets, bridges and public transport stops with de-icing chemicals. Pedestrian streets and roadways covered with ice have been sprinkled with sand and salt so that people do not slip on their way to school or to work.

Municipal services are issued with various utility vehicles for snow removal: snowplows (based on KamAZ trucks) and snow loaders. Perm has a fleet of some 300-winter service vehicles. In addition, street cleaners armed with ordinary shovels clear the snow outside residential blocks or sometimes collect remaining snow once utility vehicles have passed. All snow is taken to snow dumpsites. This winter Perm municipal services has removed more 350 cubic meter of snow.

And a beautiful, snow-white winter has come to our twin cities. In late January - early February, streets of Amnéville, Oxford, Duisburg, and even Louisville and Qingdao were blanketed in white snow.