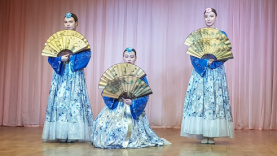 The opening ceremony included the official announcement of a new organization – the Perm Regional Branch of the Russian-Chinese Friendship Society.

The young students of Rifey Center watched the videos showing the New Year traditions and enjoyed the performances in Chinese and Korean. The Bukhal group presented traditional Korean dance with fans.  A video conference with the Li Zheng – Fomenko family from Qingdao, the twin-city of Perm, who made a live broadcasting from Qingdao   about the New Year traditions in China, became a special feature of the event.

The event concluded with awards ceremony for the participants of the competition “The Oriental New Year” – the jury handed over the prizes to eight winners and finalists.

The official event was then followed by a calligraphy workshop by Calligraphy Master Aleksander Morozov.