Russian Foreign Affairs Ministry Official Representative in Yekaterinburg: «Twinning links of Perm are the example for other Russian cities» 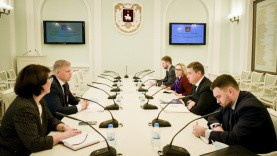 The delegation had also been received by the Perm Region Governor Dmitry Makhonin and the members of the Regional Government.

During the meeting at Perm City Administration, Alexander Kharlov, the Russian Foreign Affairs Ministry Official Representative in Yekaterinburg stressed that the relations Perm upkeeps with its twinned cities can well serve as a positive example for others to follow.

–  Russian Foreign Ministry top officials consider  the link to be of great  importance, as Perm  has always contributed successfully to  creating  a positive image of Russia abroad. The link remains  strong and efficient, and we always recommend it as best  practice and example to follow. We appreciate your support and the efforts of your team in this matter,” noted Alexander Kharlov.

Alexey Demkin stressed   that the City Administration pays a lot of attention to interaction with the twin-cities gaining a  substantial experience in it.  As one of the recent successful projects he particularly emphasized   the international electronic photo exhibition   “Contribution to Victory”. This is a  joint project  of the archives of Perm and its two twinned cities – Oxford (UK) and Louisville (USA). The exhibition located at the web-site of the Perm City Archive  was dedicated to the 75 years of Victory in WWII.

– No doubt, strengthening international relations is an integral part of the city’s policy. However, we believe that it is not the number of the twinned cities that matters but the improved quality of the links”, noted Acting Mayor of Perm Alexey Demkin.

Alexdander Kharlov informed of the intent expressed by the Consulates-General of Hungary and Byelorus’  to  visit Perm. Further, he confirmed his readiness to support and assist to the future international events in Perm, as well as to strengthening business contacts and development of industry exhibitions.  The Yekaterinburg Foreign Ministry Representation is actively sharing information on international events in Perm  via the Internet – the news always attract a lot of likes from viewrs.

On behalf of the Russian Foreign Ministry  Information Department  Alexander Kharlov presented the book titled  “Nobody gets left behind”  which talks about the efforts to help the Russian citizens return home  from abroad during the pandemic.  The book will be handed over to the Gorky Public Library. In the end of the meeting the guests   visited “The Twin-Cities Hall” at the City Administration.