Terrainkur on the Embankment in Perm: over 1,000 participants aged 8 to 80 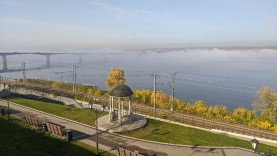 Perm residents enjoyed the sport digital terrainkur “On the Kama River Embankment”, with over 1,000 walking enthusiasts joining in.

Three walking routes were specially designed for the project: easy – 1 km, medium – 3 km, and a long one – 5km. The routes were equipped with special signs containing QR-codes.

The competition was held in several nominations, the participants amounting to over 1,000, 400 of those were of senior age.  The records showed in the competition include: “the most walking pedestrian”, Tatyana Zitta covered 76 km along the Embankment throughout the terrainkur; “the fastest pedestrian”, Alexander Bobrov finished the race at the average speed of 7.5 km/h.  The oldest of those walkers, Tamara Shpilkina is aged 80, and the youngest – Dmitry Polibin- is 8.  All the participants got the prizes, medals and trophies.

The competition was aimed at promoting physical activity of the city residents and created an additional impulse for healthy lifestyle.

The competition supported by Perm City Administration was organized by Perm Regional NGO “Power Sports Association of the Perm Region”, the winner of the Russian President Grants bid.