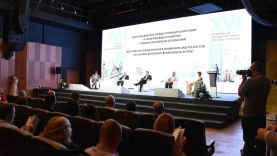 The three conference days were filled with numerous workshops, discussions,   and experience exchanges involving representatives and business experts from Russia and Germany.

The Conference under the slogan «Strengthening municipal and regional links – widening horizons» was held in the city of Kaluga and became one of the focal points of the German Year in Russia.  The Perm delegation was headed by the Vice Mayor Viktor Ageev.

In his address to conference participants the Russian Foreign Minister Sergey Lavrov pointed out:

– In Russia we do appreciate the high level of mutual understanding between the Russian and German people, viewing it as a factor promoting stability in Europe and- widely- in Eurasia.

The conference particular focus was on cooperation local (municipal) and regional levels. The participants considered promoting the dialogue between the municipalities with the view of  further development of German-Russia relations, investment and social policies, training specialists for the new economy.  The positive practices of cooperation in the field of territorial self-government was presented online by Duisburg, the twinned city of Perm.

The conference programme included the session of the working group “Russian- German Twinned Cities: remembering the past for the better future. June 22, 1941/2021 – European milestones”.  The German participants emphasized the value of the Russian people who, years after, offered the hand of friendship to the Germans willing to establish mutual understanding and trust.

Victor Ageev noted that it is at the municipal level where the direct dialogue between people is possible.

– First of all, we need to consider cooperation, friendship and interaction, despite the difference of opinion on certain issues.  This is the key to success.  It is important to uphold the existing links and the residents’ initiatives, as well as to seek for new ideas.  The role of the city administration is to ensure the continuity and sustainability of partnership relations, noted Vice Mayor Viktor Ageev.

The conference venue also featured the IV Russian-German Twinned Cities Youth Forum, where a team from Duisburg and Perm collaborated on a joint product.

The result was presented at the Forum as a “Dobrochallenge” project (#dobroduper and #dobrochallengePD). The project is dedicated to volunteers and brings together young people aged 14-18 from both cities, holding thematic mini-activities, exchanging the recorded videos and presenting them in TikTok in autumn.  The challenge will include the knowledge of eco-volunteering, as well local history and culture. The joint team has already worked out the ideas of how to promote and further develop the project and motivate the young   people.  The   discussions of the details are under way and will be continued online to finish the work on the project.

– Duisburg and Perm have much in common, and there is a lot to share.  TikTok has become   worldwide the social media most popular with those aged 14-18, while the key topic of the Forum is   «Digitalization as a chance for cooperation». Such projects help focus the youth on volunteering, and this is particularly important as it is the new generation who will build the image of our cities in future», said Anastasiya Romanova, the Forum’s participant.

Establishing partnerships and twinned links between the cities of the USSR and the two Germanies started immediately after WWII, the first “twins” appearing in1957 – Leningrad (USSR) and Hamburg (FRG). The 1980s saw the boom of German-Soviet twinning, and recently the number of the twinned cities  reached 112 “pairs”. Perm was twinned with Duisburg in 2007.