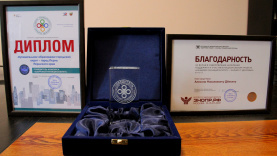 Under the International Day of Health  in April this year  Perm residents joined the All-Russian campaign called “ 10,000 steps to life”.  The aim was to involve as many people as possible into healthy way of life and physical activity.  The walking competition was organized as part of the project under the slogan “A health route to each municipality”; the project was designed by the All-Russian NGO “The Health of the Nation League” headed by academician Leo Bokeria.  50 municipalities of Russia took part in the project.

In Perm the event  was held in the city center with the route going through  the Leninsky district and being registered in  the  Nation’s Health League  official list for the Russian Federation.

The event was joined by the members of Perm Region Health Ministry,  the city’s medical organisations, NGOs and private businesses; more than 100 participants covered the walking route; this year anti-pandemic restrictions were fully followed, participants numbers were adequately limited.

Before starting  the route all those gathered had a health-check, volunteers organized a short warm-up and the participants were equipped with a walking route map and health instruction leaflets.   Each group was accompanied by an instructor and a volunteer and all the finishers got an electronic certificate.

In Perm Region the event was organized as part of “Improving the public heath” project under the National Demography Project initiated by President Putin.

The Perm City authorities on a regular basis are taking care of  sport and recreation facilities,  school and community sport grounds, etc.;  they organize a variety  of events   covering the Health Days, free training for residents and others sport events.

The results of “The Healthy Municipality” competition were  announced at the All-Russian Forum.  Perm was declared the winner for its overall results and the  Letter of Acknowledgement was handed to  Perm Mayor Aleksei Demkin  to mark the contribution to the city residents health improvement, support and participation in the national project  entitled “A health route to each municipality”.