History at a glance

The name of the city

There are several viewpoints on the origin of the name of Perm. The name is believed to be related to the word “parma” which originated in the language of the Komi-Permyak tribes and meant a hill covered with thick forest.  Although the city of Perm is, in fact, located on the hills  formerly  covered by thick pine tree forests, it is hardly possible to take “parma” as the city’s name origin  due to its phonetic features.

Another version attributes the name to a combination of the names of two tribes “em’ ” and “per” – living in the area  of the Vychegda river. 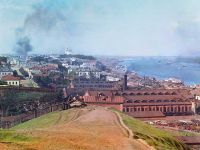 Some theories link the name of the city to the legends, in particular, those  featuring  Pear, the Komi-Permyak folk hero.  There is also a research which outlines the link between the name  of “perm’ to a land of Biarmia; the latter  is referred to in the ancient Scandinavian sagas as a land located in the east of Scandinavia where the Vikings used to travel for firs and silver.

In fact, the word “perm” was for the first time mentioned in the12thcentury record, which listed different tribes of the area. Modern toponymic studies  believe that  the word “peramaa”  («the faraway land”) meant the territory populated by  ancestors of the modern Komi-Zyryans and the Komi-Permyaks;  it further transformed  into “perm” and began to mean both the tribes and the lands where they settled in the Upper Kama area. The name hen began to refer to the whole territory of the modern Perm Region;  in the 18thcentury  it was used as the name  of the province   and finally – of  its centre, the city of Perm.

The emergence of the city.

The history of Perm city is traditionally connected with the opening of the Yegoshikha metal-smelting works in 1723. The first mentioning  of a “pochinok”, i.e. a new settling,  “on the Kama river, on the Yegoshikha river” one can find in the records dating back to 1647 and  1678.

Captain Vassily Tatischev, the mining supervisor, is regarded as the founder of Perm city as it was he who chose the area around the Yegoshikha river as location for a new state-run plant. Tatischev was then called back to St.Petersburg in 1721 and was replaced by the artillery Major-General Wilhelm de Genin.

The construction of the Yegoshikha copper-smelting works completed between May 1723 and January 1724. A 56- meter long dam, 6 smelting ovens, ore and  coal stores and other buildings were erected. By 1723 the settlement had 112 households listing 302 male population. 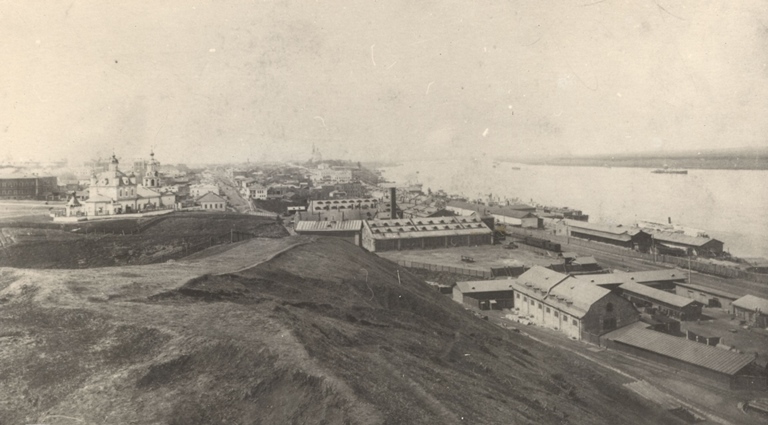 After Wilhelm de Genin left for St.Petersburg in 1734, the Perm Mining Department was moved from the metal works in Pyskor to Yegoshikha. The new management started two new schools in the settlement, those of Arithmetic and Literature,   which trained the staff for the state works, and a hospital.  In1735  the roads to Solikamsk and Okhansk were built, and a few years later the foundation of the Siberian Road was laid.  This enhanced the administrative and cultural importance of the works itself and the settlement.

In 1757-1764 the first stone buildings were erected – St.Peter and Paul Church and St.Catherine side-chapel, the office, the manager’s house and the guardhouse.

After the peasants uprising of 1773-1775 the tzar government took measures to break the large-scale provinces into a smaller units. Thus, to spot the location suitable for the center of the future Perm Province, two commissions  were sent to the Kama area, headed by  Governor-general of Kazan Prince Platon Meschersky  and the Governor of Vyborg general Evgeny Kashkin respectively. Both commissions were unanimous in choosing Yegoshukha as the best location for the new province center. 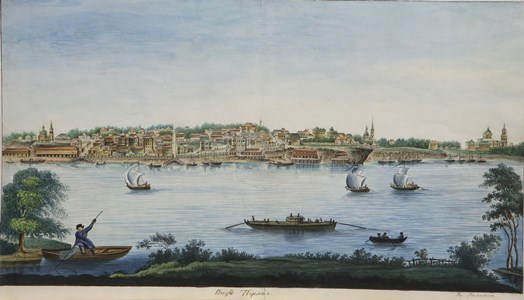 On November 20,  1780  Empress Catherine II sent a decree to general Kashkin appointing him the Governor of Perm and Tobolsk, as well as establishing the area of Perm including  two provinces – those of Perm and Tobolsk - under his rule,  and approving the new  city of Perm  as its center.

In1788  the works at Yegoshikha were closed down due to the lack of ore supply,  and in  1804  «the works and its lands  were  handed over to the benefit of  Perm City». Only the “Zavodskaya Square “ (“the Works’ Square”) near the Yegoshikha river reminded the residents of the former plant; this  was further replaced by the name “Razgulyaj” in the end of the 19th century.

The first design plan for the city was made by the local surveyor Andrey Gruber in 1782-84. The plan quite obviously retained the features of the original  settlement which gave birth to rectangular planning of the modern Perm streets.