Assembly of the Peony Pavilion started in School No2 in Perm 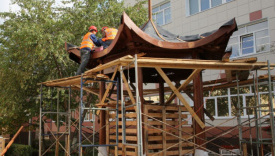 The Peony Pavilion is one of the symbols of Chinese culture and poetry that is well-known worldwide. This is a gift to the Perm Region from its partner territory of Jiangxi Province in China.

Highly qualified builders team having special skills for assembly of traditional Chinese architectural objects have arrived in Perm this week. In September they will be involved into assembly of the Peony Pavilion in the schoolyard of Gymnasium No 2.

The foundation stone for the pavilion was laid by representatives of partner territories Perm Region and Jiangxi province on May15, 2019. The 4 meter high pavilion will be 2 meters in diameter and will become one of the architectural dominants of the educational campus.  The residents of the adjacent “Sadovy” and “Griboedovsky” districts will enjoy its view from their apartments.

It wasn’t by chance that the Jiangxi authorities chose School No 2 as the location for their gift to the residents of Perm.

“The school has long become the site for most of the large-scale events in connection with China and its culture; it hosts the Chinese delegations coming down to visit Perm and specialists on Chinese culture from neighbouring towns and region”, says the school director Ludmila Sukhanova.

Assembly works for the Peony Pavilion are due to complete by the end of September 2019.